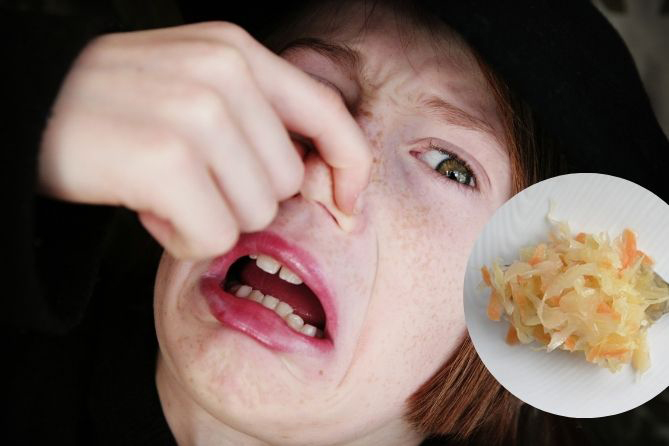 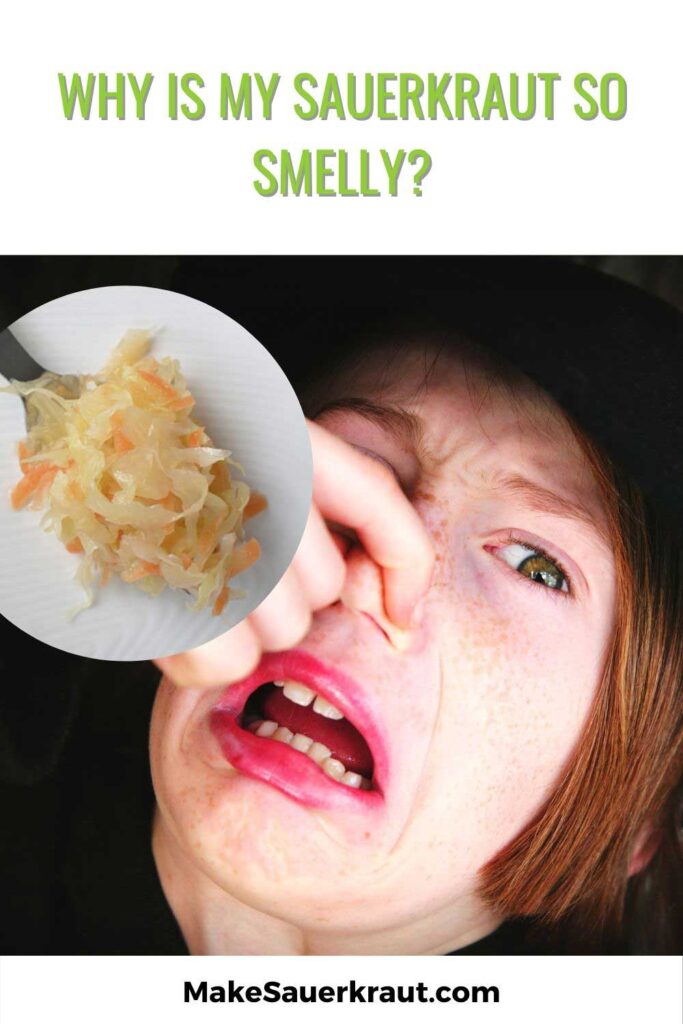 Do you have a jar of sauerkraut fermenting on your counter that smells like:

Those are just a handful of the terms used to describe what fermenting sauerkraut can smell like. Thankfully, not every batch will produce these off-putting odors.

Let’s now learn why some batches of sauerkraut release these noxious odors and what to do about them.

What exactly are we smelling?

The sulfur content of your cabbage is to blame.

This is good. Your body needs that sulfur for many reasons.

Sulfur is the third most abundant element in your body and is present in amino acids found in your skin, hair, and nails where they help to make these tissues strong and flexible.

Your body needs sulfur to build and fix your DNA and protect your cells from damage that can lead to serious diseases such as cancers. Sulfur also assists your body to metabolize food and contributes to the health of your skin, tendons, and ligaments.

Hydrogen sulfide is a gas that forms during the fermentation process.

Hydrogen sulfide is a flammable, colorless gas with a characteristic odor of rotten eggs. It is commonly known as hydrosulfuric acid, sewer gas, and stink damp. People can smell it at low levels.

But, what does this have to do with my smelly sauerkraut?

Why does my fermenting sauerkraut smell so noxious?

I have to thank one of my dear readers for solving this puzzle—and offering a solution.

Depending upon the variety of cabbage and growing conditions, the amount of sulfur in any one head of cabbage can vary greatly which is why some of us have yet to have the pleasure of experiencing these lovely odors.

When sauerkraut is fermenting much of the sulfur converts to hydrogen sulfide which is why the kraut smells a little like dirty diapers when it’s fermenting. The hydrogen sulfide is volatile and blows off as soon as the kraut is exposed to air but, if too much is trapped in the kraut for too long it can convert to compounds called mercaptans which have an unpleasant smell and are not volatile.

As this hydrogen sulfide gas gets released from your jar of fermenting sauerkraut, you notice odors like a smelly fart. What fun!

Not all odors are caused by sulfur.

According to Kirsten and Christopher Shockey, authors of Fermented Vegetables – that I reviewed here, some of the stink periodically experienced in fermentation is caused by the production of naturally occurring fatty acids.

For reasons unknown, some batches produce one or more of these acids in quantities that affect the smell.

Nasty fermentation smells will have any housemate banishing fermentation from happening in your home forever. Not what I want to see happen.

Just remind yourself of the numerous nutritional benefits they are packed with as your nose adjusts to the odors.

Rest assured, however, your sauerkraut is still safe to consume.

What to do when overpowered by smelly sauerkraut?

First off, you’ll need to identify what category the odor belongs to. Is it a noxious, pungent, or a “normal” fermentation odor?

If you jar of ferment smells noxious, this is what my reader, with a degree in fermentation science, recommends:

If a batch of kraut is particularly stinky during the initial fermentation go ahead and open your jar and mix or stir it to release the hydrogen sulfide gas. Maybe even leave the jar opened for a few hours, stirring it a few more times. Then, push the mixture back down into the jar, put your weight back in, recap the jar, and let your sauerkraut continue to ferment.

If your sauerkraut smells like rotting or putrid food, you’ll want to toss it. Putrid is an unmistakably awful odor that might even make your eyes water. Usually, molds, yeasts, or an off-color accompany truly putrid-smelling sauerkraut.

If your ferment smells, sour, reminiscent of vinegar, fresh, or tangy, all is good. It even might smell yeasty, beer-like, or of alcohol if Kahm yeast has taken residence.

What types of vegetables are high in sulfur?

Both allium vegetables (garlic, leeks, onions, scallions, and shallots) and cruciferous vegetables (broccoli, cauliflower, cabbage, arugula, kale, and radishes) are rich in sulfur and could cause overly noxious odors during fermentation.

What causes some batches of sauerkraut to smell so much during fermentation?

Many of the vegetables we commonly ferment are high in sulfur. During fermentation, much of the sulfur converts to hydrogen sulfide, a noxious smelling gas.

As long as it doesn’t smell putrid, it is safe to eat. Odors described as dirty diapers? Rotten eggs? Stinky Swiss cheese? Sulfur? Bleach? Ammonia? and Gym sweat? are different and are caused by the sulfur in your ferment.

There you have it. Why a batch of sauerkraut may smell noxious and what to do about it.

Holly Howe has been learning about and perfecting the art of fermentation since 2002.

Her mission is dedicated to helping families welcome the powerful bacterial world into their homes in order to ferment delicious gut-healing foods.

She is the author of Fermentation Made Easy! Mouthwatering Sauerkraut, and creator of the online program Ferment Like a Pro!

Read more about her HERE.

If you are fearful of poisoning your family with your ferments, frustrated by mold, or just looking to improve your gut health, I'm here to help.

I help people learn how to safely transform everyday vegetables into healthy and delicious fermented foods that are safe to eat, easy to add to meals, and will supercharge gut health.

My goal is to elevate the health of one million households by helping each and every one of you learn to safely ferment flavorful foods.

Through my passion for fermentation, your eagerness to learn the world’s oldest method of preservation and storage, and the help of millions of mighty microbes, we’ll get there... one jar at a time. Read more about MakeSauerkraut!

Learn How to Ferment

Explore My Most Popular Posts

How Do You Make Sauerkraut in a Jar? [THE COMPLETE GUIDE]

Which one(s) are you making?